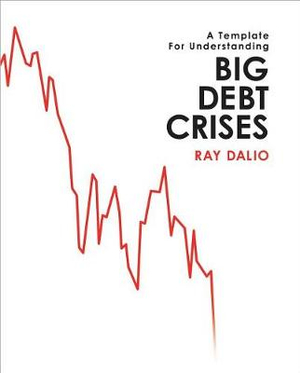 Principles for Navigating Big Debt Crises is a great read, by a chap who has been there and survived (a couple of times). There are just a handful of investors who have been able to weather the economic storms of the past four decades and steer their firms to monumental returns.

There are even fewer who have done that and established principles for investing, management, and professional growth that have become foundations of the financial industry. Ray Dalio is one of those people.

Dalio is the founder, Chairman and Co-Chief Investment Officer of Bridgewater Associates, which he started out of his two-bedroom apartment in New York in 1975. He grew the company into an investment firm that manages about $160 billion for approximately 350 global institutional clients.In his most recent book, Principles for Navigating Big Debt Crises, Dalio and his team at Bridgewater conducted extensive research into the economic events surrounding past debt crises, and how the firm was able to use that knowledge to anticipate the 2008 crisis. Below is an interview with Dalio about those events, and where he sees us now, heading into 2020. The follow is an excerpt from C. Silvers’ interview with Ray, conducted in late September, 2019.

Principles for Navigating Big Debt Crises: How will the Last Decade Shape the Next Two?

Silver: If the last decade can be characterized as a global expansion built on massive debt issuance, productivity gains, increasing wealth and political gaps, what do the next two decades look like?

Dalio: There are four main forces that I look at to understand what is most likely to happen.

When I look at technology changes and their implications on productivity and jobs, I think it will be a big force that will provide us with the capacity to raise living standards for some, but will put a lot of people out of work and will widen the wealth gap. Figuring out how to deal with this force so we get the benefits of it without the harmful consequences of it will be one of our society’s great challenges over the next 20 years.

I believe that the wealth gap and the political gap that goes along with it will be a big, bad force in the next economic downturn, which will certainly occur in the early part of the next 20 year period, and that it will not be as easily negated by central banks because their powers will be less because they can’t lower interest rates much and quantitative easing won’t be as effective.

Dalio: It appears to me that we will almost certainly enter a period that will have larger government budget deficits that central banks will have to print money to fund, which will require coordination between fiscal and monetary policy that might be challenging in the highly polarized political environment. So, we will face that challenge. How it’s handled will have a big effect. I can’t be optimistic about the political cooperation that will exist to come up with the right fiscal policies and I can’t be optimistic about the cooperation that we will see between fiscal and monetary policies. With that 20-year perspective that you’re asking me to take, I think it’s likely that the low or negative interest rates and the printing of money to finance the deficits will make it undesirable to hold one’s wealth in dollar, euro and yen denominated debt, and that will have the effect of reducing these currencies’ roles as reserve currencies. What will replace them? While I’m not sure, I do expect gold, China’s yuan and digital currencies to be more important.

Principles for Navigating Big Debt Crises: The Rise of China

Silver: We’re obviously in a trade war with China right now, but the underlying issues that brought us here have been brewing for many years. How will China’s rise play out in the next two decades?

Dalio: Regarding the rise of China, while that will be a big force that will change the world order, what exactly it means will depend on how well it’s handled which will depend on the wisdom of the leaderships of both countries. There is a concept called the Thucydides Trap, which means that in history over the last 500 years there have been 16 times that a rising power has challenged an existing power. We now have China challenging the United States. Twelve of those times that has brought about war of some kind. I can’t comment on whether there will be outright war, but I think there will be a fair amount of conflict between China and the United States. We will be in a world where it is likely that China will be larger and more important in most dimensions than the U.S. If wise leaders figure out how to make it a win-win relationship, it can be great, but it’s hard for me to be optimistic.

The Growth of Income Inequality

Silver: You’ve written a lot about the increase in income inequality and the rise of conflict between the rich and the poor here in the U.S. and around the world. Is capitalism, as we know it at least, at risk?

Dalio: Yes. I believe that it either has to be reformed to be fairer—in other words provide more equal opportunity and more tolerable economic outcomes for more people—or there will be a harmful big move to socialism that will probably go so far that it will hurt the effectiveness of the economy. I think it is pretty obvious that because of the rising wealth/income polarity, we are entering an era of greater internal conflict.

The Impact of Climate Change

Silver: How about climate change? How will that shape the global economy in the next two decades?

Dalio: At minimum, climate change is going to be an expensive disruptor; at a maximum it will be much worse. It will have the effect of changing areas that were once productive and diminishing them, particularly in agricultural production. It will bring about sea level changes that will impact infrastructure spending. It will create larger and more frequent storms that will lead to greater damage. It will also affect migration and where people will want to live. It could be worse than that. I think it will lead to technological changes that will be focused on how to deal with it effectively. I don’t yet know what these will look like.

What can History Teach us About the Future?

Silver: Beyond technology and climate change, is there an analogous period in history that we can look at to get an idea of what’s to come in the next two decades?

To be clear, I’m not saying that we are destined to have the same outcomes as in the 1930s because I don’t believe that to be the case. I am saying that the cause:effect relationships are clear, so that if we have an economic downturn with the large wealth and political gaps and central banks not having the same powers to reduce the down turns, and we have a big rising power challenging an existing world power—and we do have all of these things—we will have great risks that will test the wisdom of our leaders to handle them well.